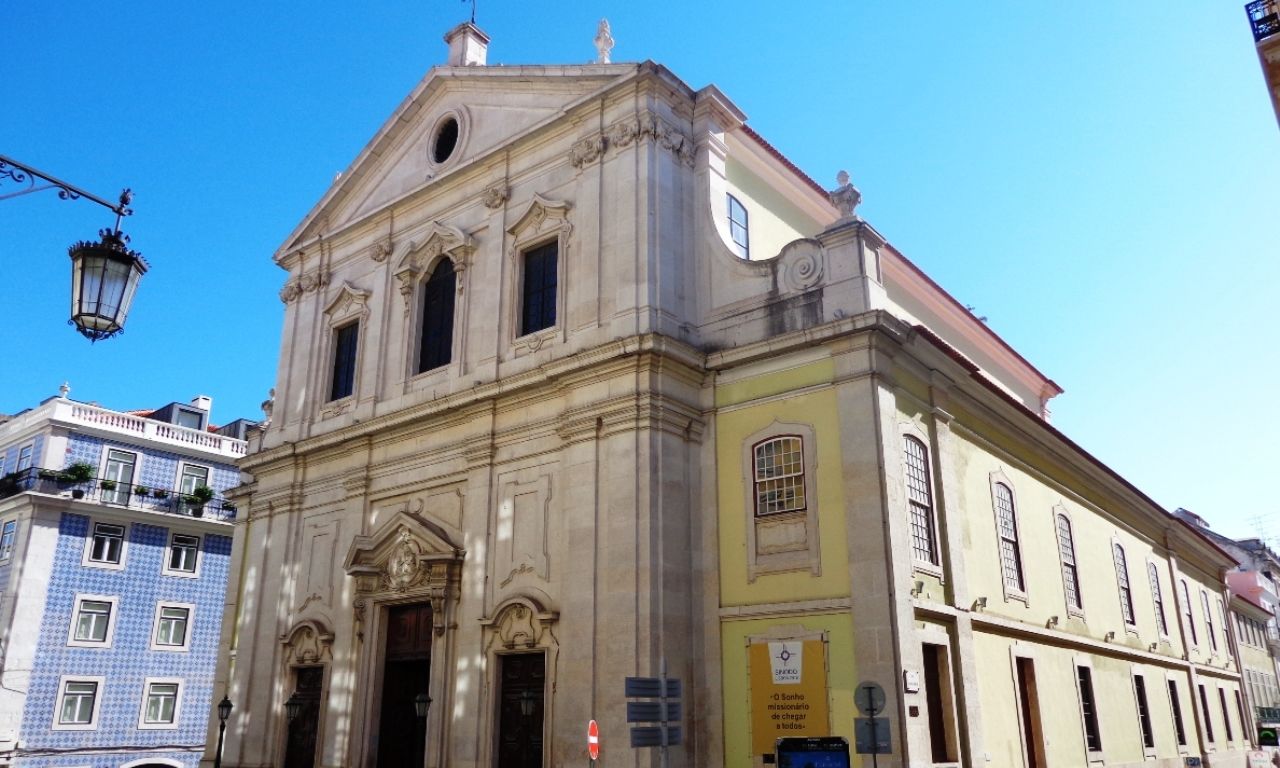 Igreja de São José dos Carpinteiros
It started out as a small hermitage in 1545 and it was elevated to a parish church in 1567. In the mid-17th century, the 16th century church underwent enlargement works, as can be seen in an inscription placed in the nave of the church. Rebuilt after the earthquake of 1755, according to the instructions of the master stonemason Caetano Tomás, it is an example of baroque and pombaline architecture. Its highlight is the rectangular main portal, with a transom of curvilinear design, elaborated around a medallion with the figure of São José in bas relief.

Igreja de São Roque
Built in the 16th century on March 24th 1506, under its patron saint, São Roque, the protector of the plague’s victims, it was consecrated on February 25th 1515 by Bishop D. Duarte. In 1553, the Society of Jesus took possession of the church, which then underwent various interventions by the architects Afonso and Baltazar Álvares and Filippo Terzi. Classified as a National Monument, it is a typical example of mannerist religious architecture, and is the original prototype for Portuguese Jesuit churches: a church with a single nave with intercommunicating side chapels, and a roof in wooden ceiling. The current façade, classicist and austere, and completely covered in stone, is the result of renovation works after the earthquake of 1755.

Igreja Nossa Senhora da Encarnação
This parish church inaugurated in 1708 was completely destroyed by the earthquake of 1755. It was rebuilt by the architect Manuel Caetano de Sousa, in the 18th century which continued up till 1873. On the rear baroque façade, six Corinthian pilasters accentuate the building’s verticality and divide the central body. The portal, with Corinthian columns, incorporates a bas relief that must have belonged to the original church. Over the side doors, two niches house small 16th century statues. The ensemble is crowned by a triangular pediment, but from the 19th century. Inside it has a single nave, without a transept, with a deep main-chapel and barrel vaults. The nave is sided by four shallow chapels.

Igreja dos Mártires
Finished in 1784, it is the oldest church in the Baixa (city centre) of Lisbon. In a neo-baroque style by the hand of the architect Reinaldo Manuel dos Santos, it contains sculpture and painting art works. A key feature is the baptismal chapel closed by a door of gilded iron with an inscription regarding the first baptism in 1147, and the Capela do Santíssimo Sacramento, clad in red and blue marble, with the image of São José.

Igreja de Nossa Senhora do Loreto
Rebuilt in 1785 by the architects Manuel Caetano and José da Costa e Silva, the last work date from 1860. It contains very valuable Italian and Portuguese works of art, belonging to the Italian community in Lisbon.
Igreja do Santíssimo Sacramento
It was built in 1702, in the baroque style with a single nave and features an abundance of marble of various types. In addition to the main-chapel, which contains the tabernacle, it includes eight stoned side altars. Two of them are next to the main chapel’s arch, and the remaining in the church’s body, bounded by fine quality wooden balustrades that combine beautifully with the magnificent vaults of the main-chapel.

Igreja da Madalena
It was rebuilt in 1761, in a late baroque style with strong neoclassical lines. It has a very valuable art collection of sculpture and paintings: two excellent woodcarvings – Santa Maria Madalena and Santa Marta - by Machado de Castro (1730 - 1822), a Crucified Christ and the Holy Family by José de Almeida (1700 - 1769) and paintings by Pedro Alexandrino (1730 - 1810) on the ceilings and altarpieces of the chapels, in particular the "Pentecost" in the main-altar and the "Last Supper" in the Capela do Santíssimo Sacramento. It has a Manueline Portal, classified as a National Monument, which survived the earthquake of 1755.

Igreja de Santo António
A neoclassical church with traces of rocaille decoration, outlined by the architect Mateus Vicente de Oliveira and finished in 1812. Worthy of highlight are the paintings by Pedro Alexandrino and, in the main-altar, the image of Santo António represented in a woodcarving which was saved from the ruins of the fire and earthquake in 1755. The church's crypt is the alleged birthplace of the patron saint of Lisbon.

Sé (Cathedral)
Showing marks of various construction and reconstruction works of the late Romanesque (façade) and Gothic style - the chapels, one of which with a tiled floor from the 13th century; the body of the church; the ambulatory and the Cloister. The Main-chapel, the sacristy, the Treasure room and the chapel of the Santíssimo Sacramento possess characteristics of the Mannerist and Baroque era and the style known as "Pombaline".

Igreja de Nossa Senhora da Vitória
Built by the Irmandade de Caldeireiros de Nossa Senhora da Vitória this church was inaugurated in 1556. Almost totally destroyed by the earthquake of 1755, it was gradually rebuilt between 1765 and 1824, when it reopened for worship. It underwent important restoration work in 1940. It is a church with a longitudinal plan and a single nave, whose main facade, facing South, is organised in a single body, outlined sideways by cornerstones and punctured by a portal, with a moulding stonework and attica embellished with a decoration of geometric and plant-like elements, articulated with a large barred window.

Igreja de São Nicolau
Church built in a late Baroque and Neo-classical style designed by the architect Reinaldo Manuel dos Santos and erected in 1780. Of particular note is the baptismal chapel with its walls lined with remarkable reliquaries.

Igreja de São Domingos
This church of the Dominican Order, founded in the 13th century, underwent consecutive renovation works, one of which in 1748, the year when Frederico Ludovice rebuilt the Main-chapel, the only area of the church that resisted the 1755 earthquake. Reconstructed by Manuel Caetano de Sousa, reusing the portal and overlying balcony of the Paço de Ribeira, its interior was once again destroyed by a fire in 1954. Afterwards it was restored and reopened for worship.